One building or two? A building was partially discovered in 1739 by Alcubierre. Described as a ‘temple’, it had semi-circular niches containing the well known frescoes of Thereus, Telephus, Chiron and Achilles and others. In Cochin and Bellicard’s book 1954 is a description of a building containing the frescoes and two equestrian statues. Cochin’s plan of the building, shown opposite, notes the location of the finds. Variously described as a temple, a basilica, and a forum, the building measured 68m by 40m and was placed on the north side of the Decumanus Maximus. 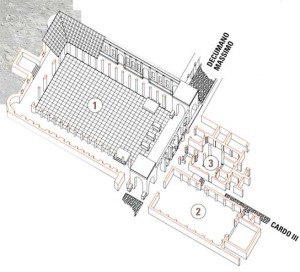 If this building, the source of these well known frescoes and equestrian statues, and the Basilica Noniana are one and the same, some obvious anomalies arise:

a) The location – on opposite sides of the Decumanus Maximus, this difference could be explained by the difficulty in locating the building due to the many twists and turns in the access tunnels.

b) The size – Cochin measured the building as 68m by 40m (larger, by the way than the Basilica in Pompeii) while the Basilica Noniana is less than half the size. Could Cochin’s measurements by out by a factor of two?

c) The orientation – Cochin placed the main entrance on the souhtwest side of the building, whereas the entrance to the Basilica Noniana is plainly on its northeast side, off the Decumanus Maximus.

So, one building or two?

BOOK YOUR TOUR AT HERCULANEUM WITH US!